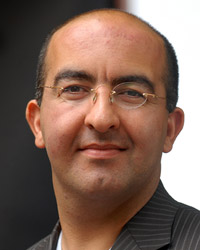 Poetry and the justification of violence

Without the element of mysticism in his philosophy Khomeini would never have achieved a position of power.  Mystic concepts dating back to the Middle Ages play a significant role in 20th century Iranian politics. In his Vidi project, Asghar Seyed-Gohrab will investigate precisely what role that is. Seyed-Gohrab, Iran specialist and member of The Young Academy of the KNAW (the Royal Netherlands Academy of Arts and Sciences), has previously conducted research into enigmas and the concept of love in classical Persian poetry. He now wants to see how mystic and philosophical elements from this poetry have been used in the twentieth century to shape new political ideas.